The UK Areas With The Most Trusted Traders

The UK Areas With The Most Trusted Traders 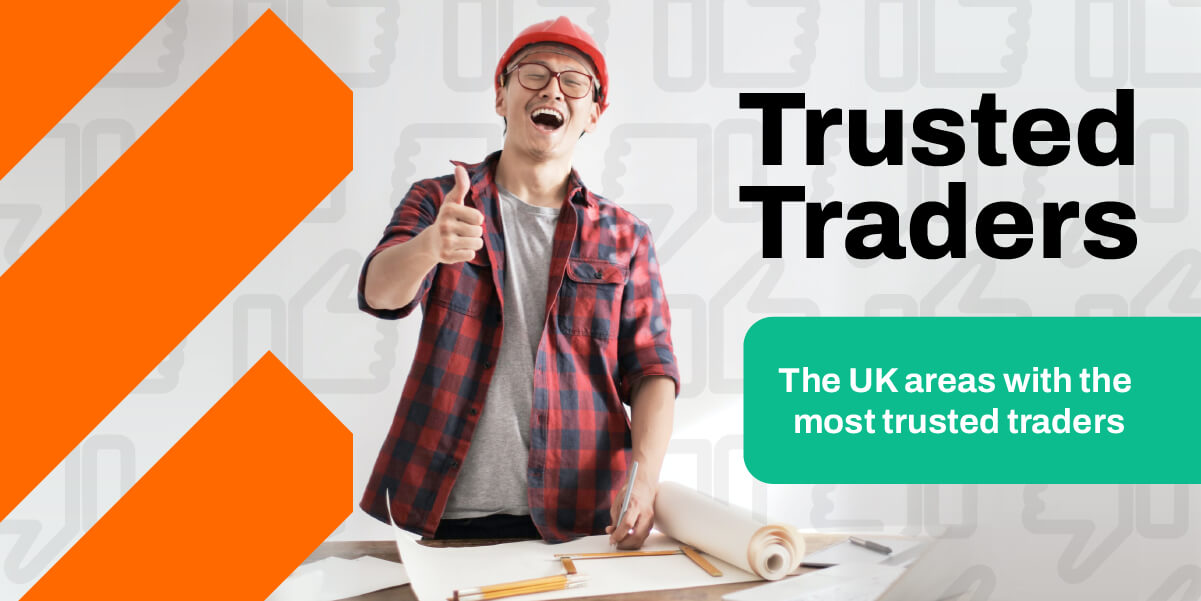 When we need work carried out on our homes, we often look to the professionals to make sure that it is done right. Whether we need boiler repairs or we're looking to build an extension, there are certain things that we just can't DIY, or at least we shouldn't!

Finding and hiring tradesmen and women can be a daunting task, especially when trying to balance a budget with the quality of work. Not only this, but we often need to invite these professionals into our home so they can carry out the necessary work, so it's important to find someone who is trustworthy, competent, and reliable.

At Buildworld, we understand just how important it is to be able to trust that the work will be a job well done and won't take you way over budget on the project you have. This is why we wanted to find out where in the country has the most trusted traders and which trades receive the highest reviews from customers.

We used Checkatrade to find out how highly customers reviewed the tradespeople they came into contact with, looking at the cities with the best reviews to find out where you can find the most trusted traders.

The Cities With The Most Trusted Traders 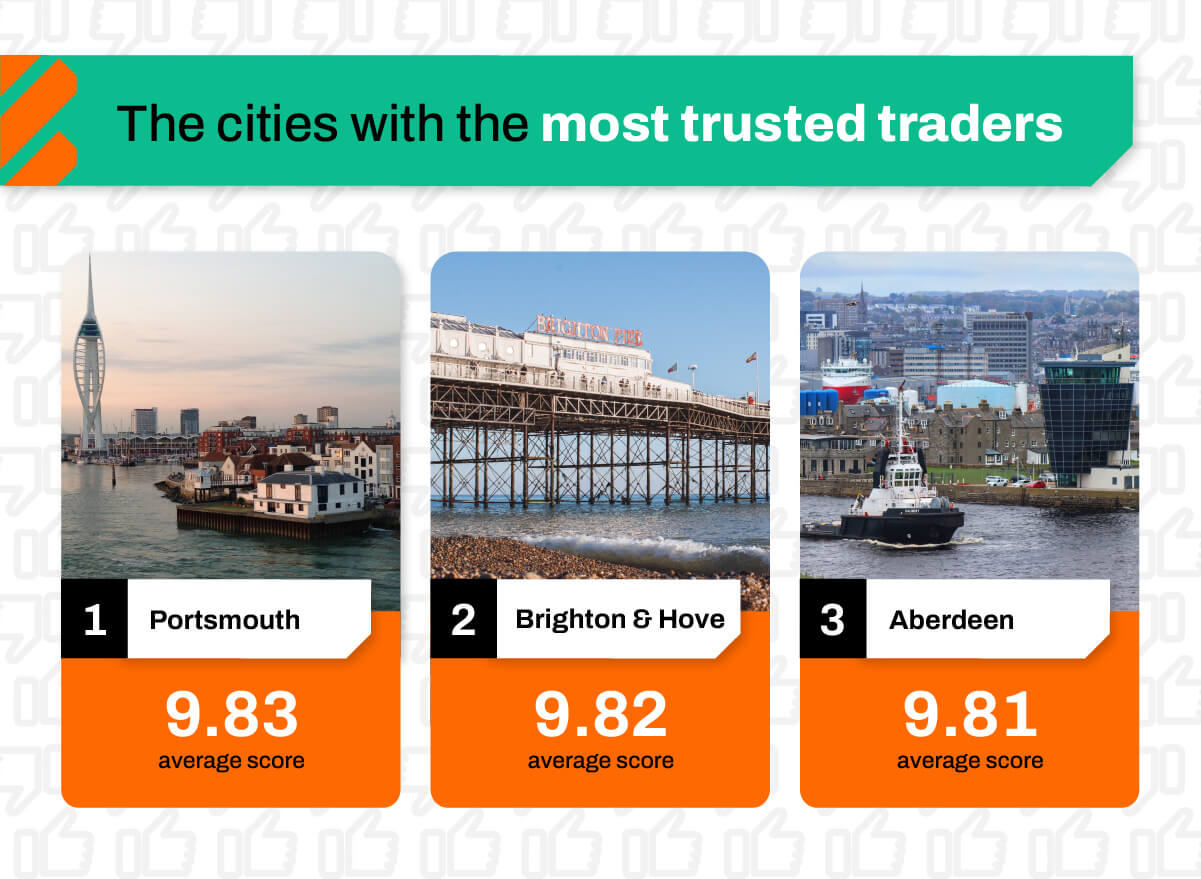 Overall, we looked at five different types of trades within 50 cities across the UK, taking an average of the scores given to each company or tradesperson in each location and trade type.

So where can you find the most trusted traders?

The port city on the south coast of England tops our list with an impressive average score of 9.83 out of 10. This suggests that Portsmouth-based customers are extremely happy with the work carried out by traders overall. With a total of 110,835 reviews given to tradespeople in the city, there is plenty of work being done to a high standard. Plasterers are the highest-rated traders in the city with an average score of 9.87.

The Most Trusted Trades 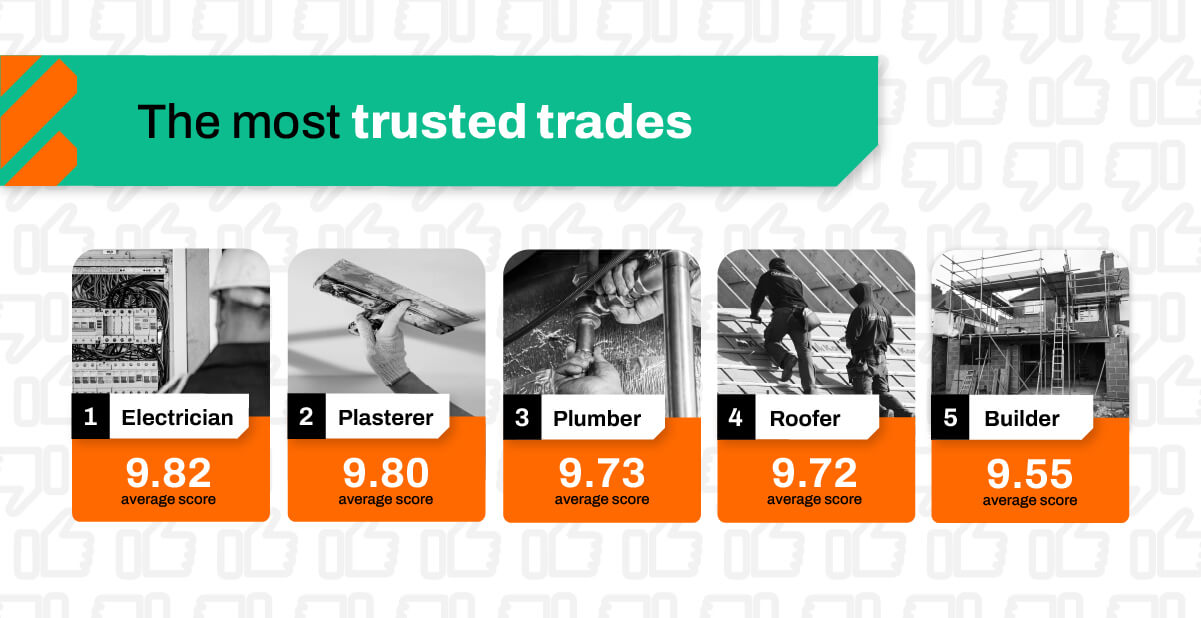 While there are a huge number of trades and specialties within the industry, we looked at just five of the most common trades, but which of these received the highest reviews on average?

The Cities With The Most Trusted Builders

If you're located in one of these cities, you're in luck the next time you need to enlist the services of a builder as they have the highest average ratings across the country.

With an average score of 9.82 out of 10, Norwich is home to the most trusted builders whose work is clearly of such a high standard to garner such great reviews from customers.

As the city with the most trusted traders, it's no surprise that Peterborough features in the top three again. In fact, when looking at the 28 building companies within the area, we discovered that seven of them received an average score of 10 out of 10.

According to Checkatrade, Portsmouth has 328 building companies listed which have received an accumulated total of 17,059 reviews with a fantastic average score of 9.77 out of 10.

The Cities With The Most Trusted Roofers

Looking at the top three cities for the most trusted roofers in the UK, we get good coverage with representatives from Scotland, Wales, and England, but which city has the highest rated roofers?

Back to Aberdeen and this time, the Scottish city tops the list with the highest-rated roofers. Aberdeen-based roofers might not be quite as highly-reviewed as plumbers in the area, but they can still boast an impressive average score of 9.87 out of 10.

Out of the 25 listed roofing companies, a whopping eight have a perfect average score of 10 out of 10, giving the cities roofers an average of 9.86.

To finish off the top three cities with the most trusted roofers, we have Ipswich where the 42 companies listed have earned an average review score of 9.85 out of 10.

The Cities With The Most Trusted Plasterers

A good plasterer is a necessity when carrying out building work to make sure you get a professional-looking finish, but where can you find the best of the best?

Sitting head and shoulders above the rest is Swansea where plasterers have an average review score of 9.92 out of 10, so you can be confident that the work will be of a high standard with Swansea-based plasterers.

Another trade and another appearance for Portsmouth where plasterers rank in the top three cities. With 141 listed plastering companies and an average review score of 9.87, Portsmouth is clearly a great city for tradespeople.

While Brighton and Hove appear to have the same score as Portsmouth when it comes to plasterers in the area, it is just a fraction of a decimal point lower, giving Brighton-based plasterers the number three spot.

The Cities With The Most Trusted Electricians

Scottish sparkies seem to be some of the best in the business with Glasgow taking the top spot for the highest-rated electricians.

With an average score of 9.92 out of 10, Glasgow takes the second spot and is the second Scottish city to make the top list of cities with the most trusted electricians.

Heading a little south across the border, Sheffield takes the second spot with an average score of 9.91 out of 10, a score that inspires confidence in Sheffield-based electricians.

Electricians in Yorkshire clearly have a good reputation amongst their customers with another city in the region placing in the top three, just behind Sheffield.

The Cities With The Most Trusted Plumbers

Plumbers are often entrusted with projects that many of us would rather not do, even if we had the expertise to take them on, but where can you find the highest-rated plumbers in the UK?

This may be the only top three appearance for Poole, but it is certainly a strong one, with plumbers in the area getting an average review score of 9.93 out of 10.

Following closely behind Poole is the city of Stoke-On-Trent, where the local plumbers have an average review score of 9.92.

Finally, Plymouth rounds out the plumbers' top three with an average review score of 9.91 across the plumbers based in the city.

How To Find A Reliable Tradesperson

As we have already stated, finding the right tradesperson for the job can be a daunting task but there are some things you can do to make the process a little easier: 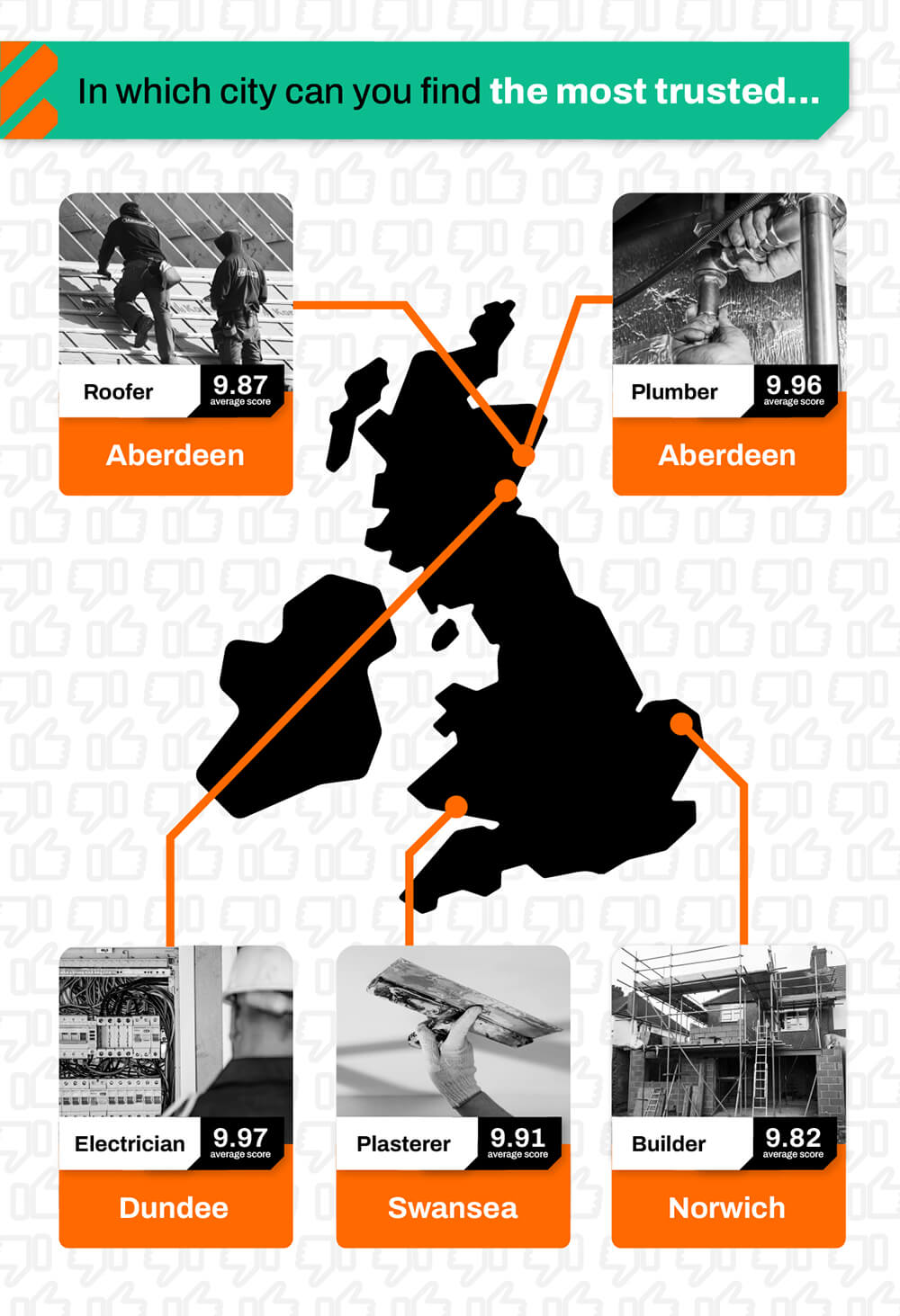 Using the Checkatrade website, we took the average review scores of listed builders, roofers, plasterers, electricians and plumbers across 50 UK cities. We then took an average of each of these within each location to give overall averages for the locations and the trades.

It should be noted that data was not retrievable in some cases when scraping pages, so while the data is as comprehensive as possible, there may be companies in each location where a score was not taken. For each trade, we removed cities where there were fewer than 100 reviews to ensure reliable averages. 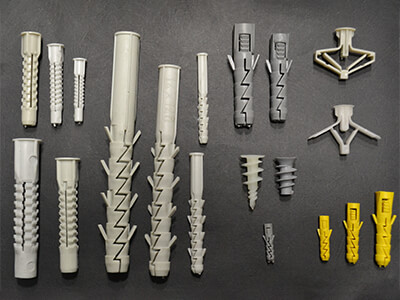 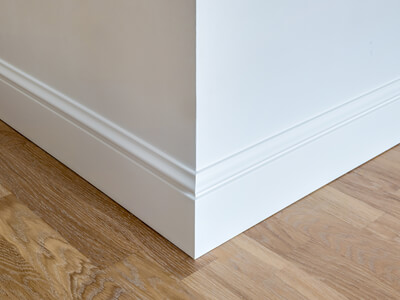